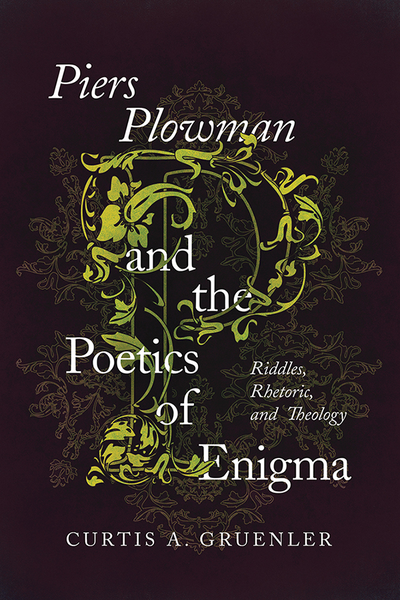 Piers Plowman and the Poetics Of Enigma

Curtis A. Gruenler, professor of English at Hope College, received the Anne Middleton Book Prize for his volume Piers Plowman and the Poetics of Enigma: Riddles, Rhetoric, and Theology (Notre Dame Press, 2017). The award was announced during the International Piers Plowman Society Conference in Miami, Florida. The prize is awarded to the best book within a two year period that is "substantively concerned with the literary, historical, religious, intellectual, textual-codicological, and critical contexts of Piers Plowman and related poetry and prose in the traditions of didactic and allegorical alliterative writing." The book was selected by a committee of scholars in Langland studies, and the winners were announced on April 6, 2019.

The judges wrote: "Curtis Gruenler’s Piers Plowman and the Poetics of Enigma: Riddles, Rhetoric, and Theology is an astonishingly broad-ranging and erudite survey of all forms of ‘riddle,' and demonstrates with great originality the applications of this material to close reading of riddling and riddle contests in William Langland’s poetic masterpiece and other contemporary vernacular texts. This volume offers the innovative proposition that all forms of riddling and riddle—everything from folk riddles and word-play through cryptic prophecies to the mysteries of Christian theology—belong to a tradition unified by a ‘poetics of enigma.' In a series of close readings larded with learned discussion of riddle material, Piers Plowman and the Poetics of Enigma demonstrates the transformative potential this paradigm has for interpretation not just of local cruxes but also the entire modus operandi of the poet: ‘the poem wants readers to play its games and to do so in the pursuit of wisdom’ (165). The riddles framework opens up myriad possibilities for rethinking and re-reading the poem, and its interpretative implications will be long lasting. A great strength of the book is that, while celebrating riddles and the enigmatic, it eschews that mode of writing itself. In not assuming previous knowledge of the poem and in treating a wide range of riddles and theories of the enigmatic with great lucidity, this book has the potential to bring new scholars to Piers Plowman."

Acquisitions Editor Stephen Little says, "Dr. Gruenler's work is unusual in its combination of depth, breadth, and clarity, and stands as a model for future medieval research. We at the University of Notre Dame Press are pleased that the volume is receiving the recognition it deserves."