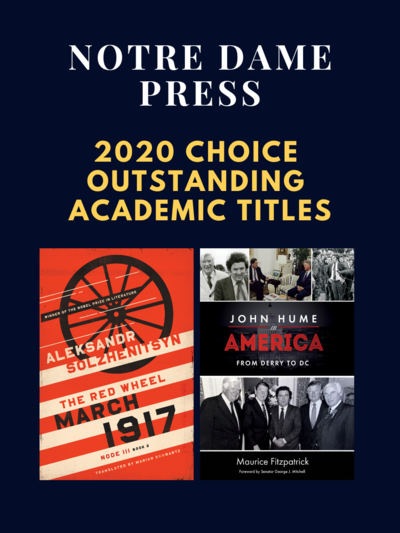 The 2020 Choice Outstanding Academic Titles have been announced and two University of Notre Dame Press books were chosen by the Choice editorial staff from among the over 3,500 titles reviewed by Choice during the past year. Our outstanding works are John Hume in America: From Derry to DC by Maurice Fitzpatrick and March 1917: The Red Wheel, Node III, Book 2 by Aleksandr Solzhenitsyn, translated by Marian Schwartz.

In John Hume in America: From Derry to DC, Maurice Fitzpatrick traces Nobel Peace Prize–winner John Hume’s philosophy of non-violence during the Civil Rights movement to his indispensable work with allies in the United States towards the creation of a new political framework in Northern Ireland. Hume passed away in August 2020.

Nobel Prize in Literature–winner Aleksandr Solzhenitsyn’s March 1917: The Red Wheel, Node III, Book 2 is set during March 13–15, 1917, the Russian Revolution's turbulent second week. "Here we see how a millennium-old nation ruled by a monarchy that had lasted a good three centuries fell apart in three days. Book 2 of March 1917 powerfully reveals how a decent if flawed political and social order collapsed 'with incredible alacrity,' as Solzhenitsyn writes elsewhere." (The New Criterion) This title is part of the The Center for Ethics and Culture Solzhenitsyn Series.

These outstanding works have been selected for their excellence in scholarship and presentation, the significance of their contribution to the field, and their value as an Important—often the first—treatment of their subject. These titles are available wherever books are sold or from our website at undpress.nd.edu.