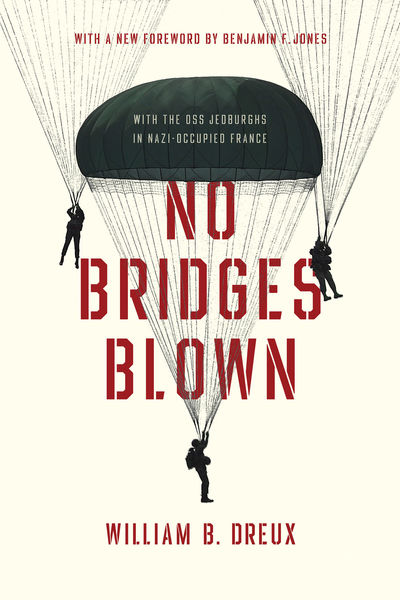 On May 8, 1945, World War II in Europe came to an end when Allied forces formally accepted the unconditional surrender of Germany. This year, we mark the seventy-fifth anniversary of the end of the war and V-E Day.

To commemorate this historic milestone, The University of Notre Dame Press is bringing back in print the military history classic, No Bridges Blown: With the OSS Jedburghs in Nazi-Occupied France by William B. Dreux. The book contains a new foreword by Benjamin F. Jones, author of Eisenhower’s Guerrillas: The Jedburghs, the Maquis, and the Liberation of France and a veteran of the Air Force 352nd Special Operation Group.

When William B. Dreux parachuted into France in 1944, the OSS infantry officer had cinematic visions of blood-and-guts heroics, of leading the French Maquis resistance forces in daring missions to blow up key bridges and delay the German advance.

This isn’t the glamorized screen-ready account he expected; this is the real story. Dreux’s three-man OSS team landed behind enemy lines in France, in uniform, far from the targeted bridges. No Bridges Blown is a story of mistakes, failures, and survival; a story of volunteers and countrymen working together in the French countryside. The only book written by one of the Jedburghs about his wartime experiences, Dreux brings the history of World War II to life with stories of real people amidst a small section of the fighting in France. These people had reckless courage, little training, and faced impossible odds. This story will resonate with veterans and everyday citizens alike and brings to life the realities of war on the ground in Nazi-occupied France.

EARLY PRAISE FOR NO BRIDGES BLOWN

“In the summer of 1944, as the Allies made brutally slow headway in liberating France, teams of paratroopers—including French officers—were dropped behind enemy lines to coordinate guerrilla operations with resistance leaders. . . . In No Bridges Blown, United States infantry officer William Dreux memorializes his riveting experiences on one of those teams in Brittany . . . Dreux’s beautifully rendered depiction . . . is unique and revelatory.” —Foreword Reviews

"William Dreux's account of his time with the Office of Strategic Services' (OSS) elite Jedburgh teams is the rare war story offering a glimpse into the vital work that took place behind the lines of battle. No Bridges Blown is a compelling, illuminating memoir of his time working with the French Resistance, a valuable companion to tales of combat." —Gregory A. Freeman, author of The Forgotten 500

"No Bridges Blown is one of the most authentic accounts of life behind-the-lines in Occupied France that I've ever read." —Colin Beavan, author of Operation Jedburgh

William B. Dreux (1911–1983) graduated from the University of Notre Dame in 1933 and earned a law degree at Tulane University. After serving in WWII as a U.S. Army Infantry Officer assigned to the Office of Strategic Services (OSS), he co-founded the Jones Walker law firm in New Orleans.

No Bridges Blown is available wherever books are sold, our website, and amazon. We encourage you to support your local bookstores where you can purchase this book and many others online. For more information, or a review copy, contact Kathryn Pitts at pitts.5@nd.edu or (c) 574.210.6155.