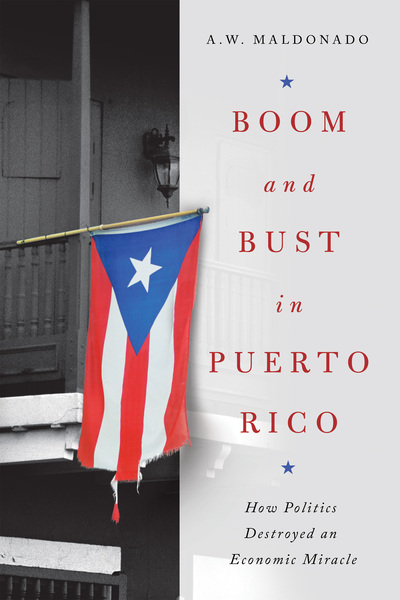 Boom and Bust in Puerto Rico

Who is to blame for the economic and political crisis in Puerto Rico—the United States or Puerto Rico? A. W. Maldonado, a retired journalist who spent more than fifty years covering Puerto Rico’s politics and economy as reporter and columnist, offers his own explanation. In Boom and Bust in Puerto Rico: How Politics Destroyed an Economic Miracle, available this month from University of Notre Dame Press, Maldonado charts the rise and fall of the Puerto Rican economy and explains how a litany of bad political and fiscal policy decisions in Washington and Puerto Rico destroyed an economic miracle. This book provides a fascinating historical perspective on the problem and an unequivocal answer on who is to blame.

Under Operation Bootstrap in the 1950s and '60s, the rapid transformation and industrialization of the Puerto Rican economy was considered a “wonder of human history.” Boom and Bust in Puerto Rico is the story of how the demise of an obscure tax policy that encouraged investment and economic growth led to escalating budget deficits and the government’s shocking default of its $70 billion debt. Maldonado also discusses the extent of the devastation from Hurricane Maria in 2017, the massive street protests during 2019, and the catastrophic earthquakes in January 2020.

After illuminating the century of misunderstanding between Puerto Rico and the United States—the root cause of the economic crisis and the island’s gridlocked debates about its political status—Maldonado concludes with projections about the future of the relationship. He argues that, in the end, the economic, fiscal, and political crises are the result of the breakdown and failure of Puerto Rican self-government. Boom and Bust in Puerto Rico is written for a wide audience, including students, economists, politicians, and general readers, all of whom will find it interesting and thought provoking.

Heidie Calero says, “Boom and Bust in Puerto Rico offers a fascinating account of how a misunderstanding of the meaning of self-determination is at the core of Puerto Rico’s economic and political history.” Antonio Garcia Padilla says, "A. W. Maldonado makes a keen and engaging assessment of the political and economic trials Puerto Rico has faced in its twelve-decade-long relationship with the United States…This book should fare high in the agenda of those interested in the future of Puerto Rico, as well as those interested in the future of the many non-sovereign nations that today struggle with larger political entities to accommodate their national identity.”

Boom and Bust in Puerto Rico: How Politics Destroyed an Economic Miracle is available in hardcover and digital editions. You can view the book video here. For more information about the book, or to request a review copy, contact: Kathryn Pitts, pitts.5@nd.edu, 574.631.3267.