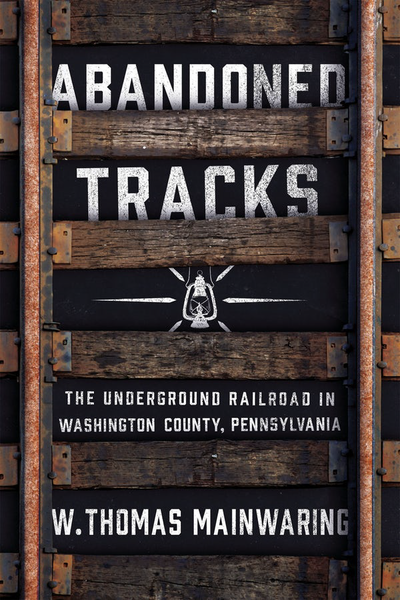 The University of Notre Dame Press is proud to announce that Abandoned Tracks: The Underground Railroad in Washington County, Pennsylvania by W. Thomas Mainwaring received the INDIES 2018 Silver Book of the Year for Multicultural Studies. Mainwaring is professor and department chair of history at Washington & Jefferson College.

Abandoned Tracks is an in-depth analysis of the Underground Railroad, which has long been mythologized by emotion, memory, time, and wishful thinking. Separating fact from fiction, Mainwaring focuses on Washington County, Pennsylvania, as a case study of the transition from slavery to freedom and of the origins of black and white abolitionism.

“Abandoned Tracks separates the myths of the Underground Railroad in Western Pennsylvania from the facts," writes A. Parker Burroughs, author of Washington County Murder and Mayhem: Historic Crimes of Southwestern Pennsylvania. "The author has dissected and discredited long-believed legends while uncovering verifiable evidence of exactly how escaped slaves traveled through the region and who assisted them on their way. The book reveals the often overlooked heroics of the fleeing slaves and the free African Americans who aided their escape."

This year marks the 21st annual Foreword INDIES Book of the Year Awards. Over 2,000 entries were submitted in 56 categories, with Foreword’s editors choosing approximately 10 finalists per genre. Those finalists were then mailed to individual librarians and booksellers charged with picking the Gold, Silver, and Bronze winners.

Foreword Reviews, a book review journal focusing on independently published books, announced the winners of its INDIES Book of the Year Awards on June 14, 2019. The INDIES recognize the best books published in 2018 from small, indie, and university presses, as well as self-published authors. You can view all of the winners here:

“Being surrounded by the year’s best books from independent writers and publishers is a humbling and invigorating experience that we take seriously at every step of the judging process,” says Foreword Reviews Managing Editor Michelle Anne Schingler. “As the INDIES progress, our editors, and our librarian and bookseller judges, have the honor and the privilege of discovering and rediscovering independent titles that give us hope about the future of publishing and that, at their best, make us consider the world around us anew.”