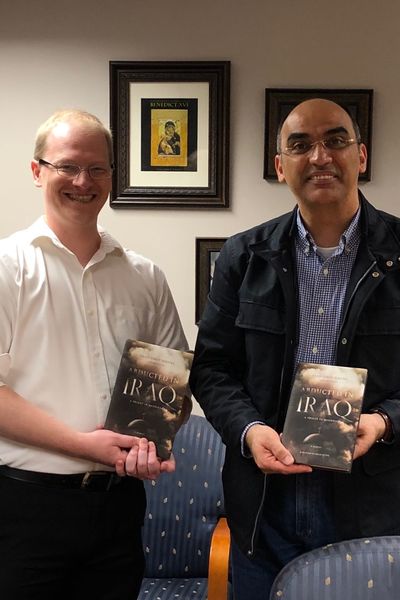 On January 1, 2021, University of Notre Dame Press acquisitions editor Stephen Little left the Press after a decade of service. Stephen came to Notre Dame Press in August 2010 after completing his Ph.D. in Literature at the University of Notre Dame. During his early years at the Press, he served as the sole acquisitions editor from 2012 to 2015, acquiring approximately 50 books a year in medieval studies, theology, religious studies, philosophy, Latin American studies, and Irish studies. During his remaining years at the Press, Stephen has honed his acquisitions skills in the fields of medieval studies, theology, and philosophy, attracting some of the preeminent scholars in these areas. His authors include: David Aers, William Desmond, Paul J. Griffiths, David Bentley Hart, Matthew Levering, Denys Turner, to name just a few.

"Over the past ten years, Stephen's impact on UNDP's publications in religion, theology, and philosophy has been profound," says Steve Wrinn, director of Notre Dame Press. "He arrived at the Press during a challenging turning point in UNDP's history and he is singularly responsible for establishing the reputation we now enjoy in these disciplines. A trusted and valued colleague, we will miss Stephen and we wish him the best of luck in his future endeavors."

Eli Bortz, editor in chief, notes that, “Stephen has a depth of knowledge in so many crucial areas that define this Press, that we can only aspire to compensate for a fraction of the institutional history he embodies. He represents the best of Notre Dame.”

Through the years, Stephen's dedication has been focused on the success of the Press. His commitment to his craft, the hard work and practice that he poured into it, is apparent to everyone. And his books have earned numerous awards, including:

Stephen Little adds, "It has been an honor to work alongside so many talented and dedicated individuals, and to serve Notre Dame and the academic community in this role. As director, Steve Wrinn has assembled an amazing team, and I am glad as I leave that the Press is in good hands. When I arrived in 2010, the fate of the Press was uncertain; ten years later, it is secure and has a strong future ahead of it. The colleagues and friends that I have worked with will remain in my heart and my prayers, and I look forward to their continued success."