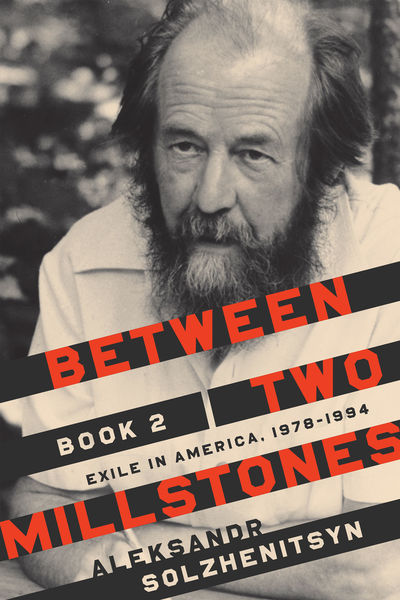 “When you read Aleksandr Solzhenitsyn you know that you are reading and being read by one of the greatest men of the bloody 20th century.” —The American Conservative

Russian Nobel Prize-winner Aleksandr Solzhenitsyn, author of One Day in the Life of Ivan Denisovich, was charged with treason in 1974 and exiled to the West upon publication of The Gulag Archipelago. He lived quietly and reclusively for nearly two decades in Cavendish, Vermont, where his neighbors fiercely guarded his privacy. On November 15, 2020, the University of Notre Dame Press will publish the concluding volume of Solzhenitsyn's two-part memoir of the West, Between Two Millstones, Book 2: Exile in America, 1978-1994, which gives us a glimpse for the first time into those years. The book is translated by Clare Kitson and Melanie Moore with a foreword by Daniel Mahoney.

This long-awaited English translation picks up Solzhenitsyn’s remarkable and courageous literary and personal life in 1978, after his controversial commencement address at Harvard University, and concludes in 1994, as he bids farewell to the West and prepares at last to return to his Russian homeland with his brilliant wife Natalia. Insightful, and at times humorous, and always focused on his family, faith, and work, this book reveals the whirlwind of literary and humanitarian activity that was taking place at Solzhenitsyn's rural New England estate, as well as the author’s travels and perceptions on political, religious, and literary figures of the era.

Between Two Millstones, Book 2, has been reviewed and excerpted widely by national media:

You can read an interview with translators Clare Kitson and Melanie Moore here.

View the book video for Between Two Millstones, Book 2.

Virtual book events are scheduled with the de Nicola Center for Ethics and Culture, the Cavendish Historical Society, and the Kennan Institute, Wilson Center, Washington, DC.

Between Two Millstones, Book 2: Exile in America, 1978-1994 is available in hardback and digital editions from the University of Notre Dame Press. The book is part of The Center for Ethics and Culture Solzhenitsyn Series.  For more information, or a review copy, contact: Kathryn Pitts, pitts.5@nd.edu, 574.631.3267.