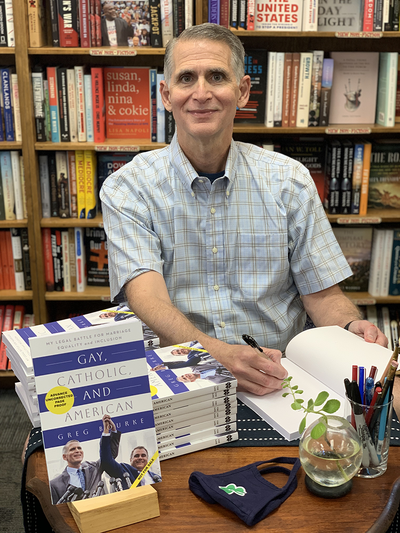 In September, the University of Notre Dame Press will publish Gay, Catholic, and American: My Legal Battle for Marriage Equality and Inclusion by University of Notre Dame alumnus Greg Bourke (ND MA ’82). In this compelling memoir, Bourke tells the inspiring story of how his family struggled to overcome antigay discrimination. He became an outspoken gay rights activist after being dismissed as a troop leader from the Boy Scouts of America in 2012. Bourke and his husband Michael De Leon became named plaintiffs in one of the most pivotal Supreme Court cases in LGBTQ+ history, Obergefell vs. Hodges, which legalized same-sex marriage nationwide in 2015. June 26, marks the sixth anniversary of the landmark Supreme Court decision. Bourke and his husband were named 2015 Persons of the Year by the National Catholic Reporter. His active presence as an outspoken LGBTQ+ rights activist remains strong today. Bourke’s message to the Catholic LGBTQ community is to remain strong in the Catholic faith and stay hopeful for change in the Church.

In Gay, Catholic, and American, Bourke recounts growing up in Louisville, Kentucky, as an out gay man living in the South during the 1980s and ’90s. Bourke is unapologetically Catholic, and his faith provides the framework for this inspiring story of how the Bourke De Leon family struggled to overcome antigay discrimination by both the BSA and the Catholic Church and fought to legalize same-sex marriage across the country. Gay, Catholic, and American is an illuminating account that anyone, no matter their ideological orientation, can read for insight.

Author Joseph Mello writes, “The reader is struck by Bourke’s conciliatory attitude toward his opponents, his unassuming tone, and his humility—despite an impressive list of accomplishments and accolades.” Michael J. O’Loughlin, national correspondent for America, praises Bourke’s story as, “one of perseverance and tenacity, of refusing to settle for less and daring to dream big. LGBTQ Catholics and those who desire more welcoming institutions will be encouraged and inspired by reading this book.” Gay, Catholic, and American was reviewed by Molly Sprayregen in Forward Reviews who writes, “Bourke’s story is directed by perseverance, grit, and faith. Throughout, he refuses to accept that his sexual orientation and his religion cannot coexist. His text is inspirational, humble, and engaging.”

Bourke has scheduled a virtual and in-person book tour celebrating the release of Gay, Catholic, and American.

Greg Bourke is available for interviews.

You can learn more about the book here and in this video.

Gay, Catholic, and American is available for pre-order from the University of Notre Dame Press. For more information about the book, or for interview requests, contact: Kathryn Pitts, pitts.5@nd.edu, 574.631.3267