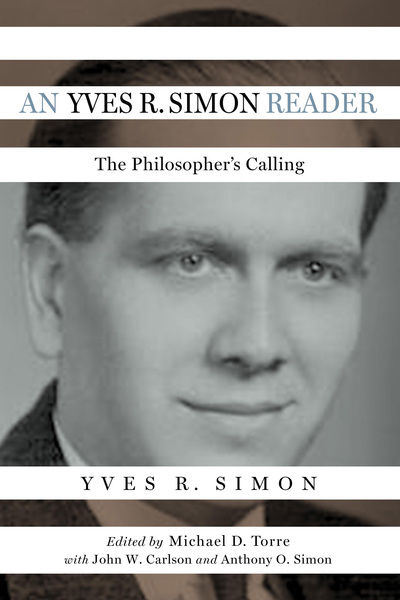 French Catholic (and then American) political philosopher Yves R. Simon was a student of Jacques Maritain and one of the most important figures in the revival of Thomism. In 1938, after earning international recognition as a Catholic thinker, the president of Notre Dame, Rev. John O’Hara, C.S.C., invited Simon to teach Philosophy at Notre Dame. There Simon continued to produce his political and social writings focusing on issues surrounding wealth, workers, and culture. He was the author of numerous books, including A General Theory of Authority (1991) and Philosophy of Democratic Government (1993), both published by the University of Notre Dame Press. After the start of World War II, Simon became outspoken about the need to destroy fascism and defend democracy, eventually becoming known around the world as “the philosopher of the fighting French.”

In An Yves R. Simon Reader: The Philosopher’s Calling, editor Michael D. Torre provides an illuminating and helpful introduction to Simon’s life and thought. The volume contains selected key texts from all of Simon’s twenty books, half of which were published posthumously, dividing them into three sections. The text defends the Aristotelian and Thomistic account of human knowing, discusses human freedom, and covers the chief concerns of his social and political philosophy. The hallmarks of his work—his careful conceptual analysis, his genius for finding undervalued examples, and his talent for creating expressions that revivified an outworn idea—are on display throughout. Indeed, as one of the book’s contributors says, Simon touched nothing that he did not adorn. This is the first collection of texts from the entirety of the philosopher’s work.

Simon’s political and social thought continues to be influential today. Along with Jacques Maritain and Etienne Gilson, he belongs to the ranks of the great modern contributors to the Aristotelian-Thomistic tradition. This book provides new readers of Simon an introduction to the thought of a key and underappreciated modern philosopher. Giuseppe Butera, editor of Reading the Cosmos, praises An Yves R. Simon Reader as, “a highly accessible introduction to the profound thought of a first-class mind. Anyone interested in Thomism or the subjects treated by Simon, including freedom, authority, and the common good, will find it very readable.”

The book is part of Catholic Ideas for a Secular World Series, edited by O. Carter Snead, which features authors from around the world who expand the influence of Catholic thought on the most important conversations in academia and the public square.

An Yves R. Simon Reader: The Philosopher’s Calling is available in paperback and digital editions from the University of Notre Dame Press. For more information about the book, contact: Kathryn Pitts, pitts.5@nd.edu, 574.631.3267