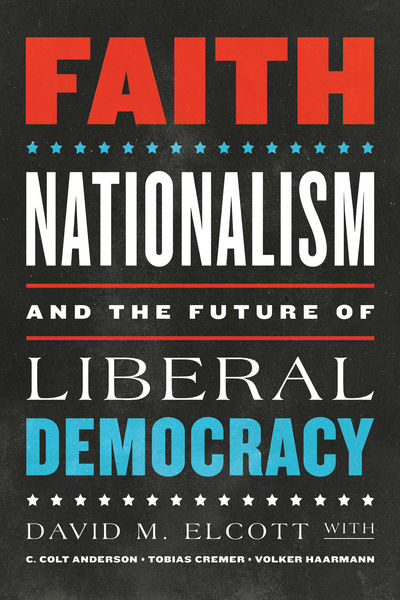 Faith, Nationalism, and the Future of Liberal Democracy

"Faith, Nationalism, and the Future of Liberal Democracy . . . impart[s] a cogent, academic, and rich way of understanding how religion has been turned political weapon; it gives significant advice about what to do to address the problem . . . [and] explains how religious claims have been warped and understood to be more about belonging than believing." —Foreword Reviews (starred review)

"In this trenchant analysis, Elcott . . . teams up with other researchers to explore the ways religion impacts politics in the U.S. and Europe. . . . This is a startling reminder of the insidious potential of religious identity being overtaken by extremist political forces." —Publishers Weekly

"It is vital for citizens of liberal democracies to understand the populist movements that are challenging democracy from within. By explaining how religion has been co-opted by nationalist populism, and by showing how religion can help provide an antidote to populism, this learned and insightful book helps us appreciate the dilemmas of contemporary democratic politics." —Andrew Preston, author of Sword of the Spirit, Shield of Faith

In Faith, Nationalism, and the Future of Liberal Democracy (May 1, 2021), David M. Elcott, C. Colt Anderson, Tobias Cremer, and Volker Haarmann examine the use of religious identity to fuel the rise of illiberal, nationalist, and populist democracy. This is a timely book in light of increasing anti-democratic populist nationalist movements around the globe and former President Donald Trump's use of religious rhetoric and imagery to justify his actions. It will interest readers who value democracy and are concerned about growing threats to it, and especially for people of faith and religious leaders.

You can read more about the book in this interview with David Elcott and Jeremiah Rood or at Notre Dame Press Blog.

Faith, Nationalism, and the Future of Liberal Democracy is available in paperback and digital editions from the University of Notre Dame Press. For more information about the book, contact: Kathryn Pitts, pitts.5@nd.edu, 574.631.3267