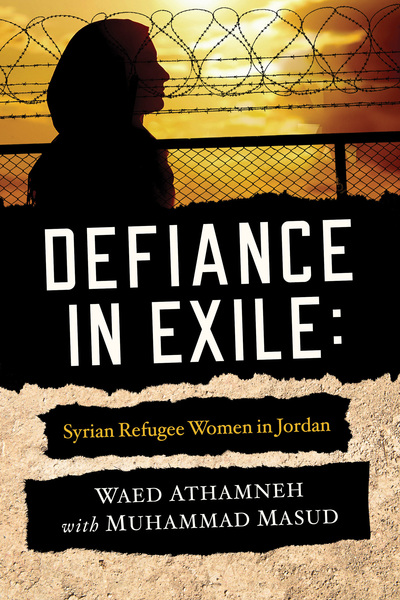 Waed Athamneh, whose previous book Modern Arabic Poetry was published by University of Notre Dame Press in 2017, returns with a new volume, co-authored with Muhammad Masud, titled Defiance in Exile: Syrian Refugee Women in Jordan. In 2015, Athamneh and Musad began collecting the testimonies of Syrian refugee women living in the al-Zaatari Camp in northern Jordan—the largest Syrian refugee camp in the world, home to 80,000 inhabitants. Defiance in Exile contains nearly two dozen interviews, which give voice to single mothers, widows, women with disabilities, and those who are victims of physical and psychological abuse. Having lost husbands, children, relatives, and friends to the conflict, they struggle with what it means to be a Syrian refugee—and what it means to be a Syrian woman. It depicts their journey, their desperate, chaotic lives as refugees, and their hopes and aspirations for themselves and their children in the future. These oral histories register the women’s political outcry against displacement, injustice, and abuse.

The authors chronicle the history of Syria’s colonial legacy, the torture and cruelty of the Bashar al-Assad regime during which nearly half a million Syrians lost their lives, and the eventual displacement of more than 5.3 million Syrian refugees due to the crisis. This work allows readers to hear refugee women’s own words about torment, struggle, and persecution—and of an enduring spirit that defies a difficult reality. Their stories speak of nearly insurmountable social, economic, physical, and emotional challenges, and provide a distinct perspective of the Syrian conflict. The book will interest all readers who support refugees and displaced persons as well as students and scholars of Middle East studies, political science, women’s studies, and peace studies.

Hillary J. Haldane says, “Athamneh and Masud are masterful storytellers, and they narrate the lives of the individuals they encounter with an emotional richness that brings the reader into the experiences without any hint of voyeurism.” Dawn Chatty describes Defiance in Exile as, “a powerful testimony of hope despite war, unimaginable heartbreak, and economic hardship. It is a book that delivers on its promise to truly reveal what it is like to be in a refugee camp.” Ambassador Frederic C. Hof assures readers, "If there is a 'must read' book inspired by what has happened to Syria and Syrians over the past decade, this is it.” Miriam Cooke asks, “Can you read these stories of loss, madness, despair, claustrophobia, and resilience without screaming that something must be done?"

Learn more about the book in this video.

Read an excerpt from Defiance in Exile here.

Defiance in Exile: Syrian Refugee Women in Jordan is available in paperback and digital editions from University of Notre Dame Press. You can purchase copies wherever books are sold. We encourage you to support your local independent bookstore either in person or online.