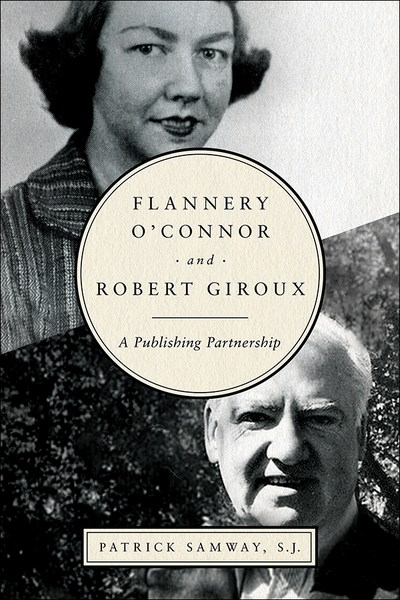 Flannery O'Connor is considered one of America's greatest fiction writers. The immensely talented Robert Giroux, editor-in-chief of Harcourt, Brace & Company and later of Farrar, Straus & Giroux, was her devoted friend, admirer, and editor. Flannery O'Connor and Robert Giroux: A Publishing Partnership by Patrick Samway, S.J., sheds new light on O'Connor's and Giroux's personal and professional relationship, including never before published letters, from their meeting in 1949 until her death in 1964 from lupus at the age of thirty-nine.

The book is fun to read, giving us a fresh perspective on the postwar authors we thought we knew including Robert Lowell (who introduced O'Connor to Giroux), Caroline Gordon, Sally and Robert Fitzgerald, Allen Tate, Thomas Merton, and Robert Penn Warren, most of whom were friends and colleagues of O'Connor and Giroux's authors. This riveting account of publishing history will interest O'Connor's fans and all readers and students of American literature.

"This is a masterful account of the literary and personal relationship between O’Connor the brilliant writer and Giroux the editor par excellence. Using a wide range of sources, Patrick Samway, S.J., situates both O’Connor and Giroux within a broad context of biographical, historical, cultural, and literary influences and traces their mutual development and growing friendship as it developed into an intimate editor/author partnership. Samway’s own skills as an editor—his impressive command of details, his judicious insights and judgments, his sensitivity to the challenges both figures faced in their careers—helps create a nuanced narrative of two of the brightest literary presences of the twentieth century." —John F. Desmond, author of Risen Sons: Flannery O’Connor’s Vision of History

Patrick Samway, S.J., was a friend of Robert Giroux for over twenty years. He is professor emeritus of English at St. Joseph's University in Philadelphia and the author or editor/co-editor of thirteen books, including The Letters of Robert Giroux and Thomas Merton and Walker Percy: A Life, selected by the New York Times Book Review as one of the notable books of 1997.