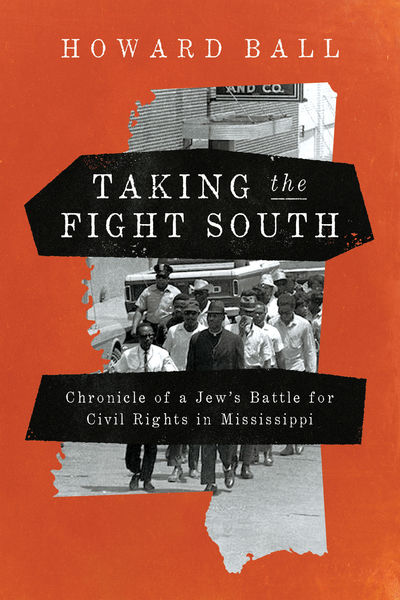 Distinguished historian and civil rights activist Howard Ball has written extensively about civil rights and civil liberties. In Taking the Fight South, Ball’s candid and beautifully written memoir, he focuses on six years, from 1976 to 1982, when he and his Jewish family moved from the Bronx to Starkville, Mississippi, where he taught in the political science department at Mississippi State University. With breathtaking historical authority, Ball narrates the experience of his family as Jewish outsiders in Mississippi, contending with the aftermath of the civil rights struggle. From refereeing football games and helping young black girls integrate the segregated Girl Scout troops in Starkville, to life-threatening calls from the KKK in the middle of the night, from his work for the ACLU to his arguments in the press and before a congressional committee for the extension of the 1965 Voting Rights Act, Ball takes the reader to a precarious time and place in the history of the South.

Taking the Fight South debuts while the United States is in the midst of its most recent human and civil rights movement. In her foreword to the book, Jennifer A. Stollman, former director of the William Winter Institute for Racial Reconciliation at the University of Mississippi, points out that on the heels of the COVID-19 pandemic, continued police brutality and the murder of Black men and women pushed the second phase of the Black Lives Matter movement into the forefront of American hearts and minds. Stollman writes, “With much of the country shut down, Americans are forced to confront their country’s pernicious historical and contemporary legacies and the impacts of systemic, institutional, and interpersonal white supremacy.”

Ball, at 83-years-old, ponders his commitment to equity and justice from his days in a Bronx tenement to now, as professor emeritus of political science at the University of Vermont. “He understands," Stollman continues, “that succeeding at racial justice is a lifelong endeavor and a daily struggle. His work lays out all we need to know to make deep and lasting impacts on equity and against racism.”

He cites just one example of the perennial existential battles between racism and equality: the continuing tragedy of separate and segregated public schools in the U.S. "In the 1940s," Ball asks, "would the parents of black children have agreed to Jim Crow Deluxe public schools rather than go along with the NAACP's legal call for an end to separate public schools based on race?" Accepting Deluxe segregated public schools, Ball explains, would have ensured better pay for black teachers, new school buses, new textbooks, new science labs and equipment, and improved school buildings. Demanding and winning integration of these schools meant a more hostile time, including further deterioration of black education, White Citizens Councils, the KKK, arson, mayhem, fear, and murder.

Quoting Lutheran theologian Dietrich Bonhoeffer, Ball says, "We are not to simply bandage the wounds of victims beneath the wheels of injustice, we are to drive a spoke into the wheel itself." For most of my life, Ball claims, "I saw his words as a profound guide for my behavior. In the age of Trump, on too many sleepless nights, I wonder if bandaging the wounds of the victims of the big lie is simply enough? But then I decide, like so many men and women did before me, that I cannot turn my back on injustice."

"Howard Ball's memoir connects the dots between his teaching and scholarship on constitutional law and civil rights, his life and career as an advocate for racial equality, and his Jewish identity. It offers a first-hand narrative of a southern Jewish community from the perspective of a never-fully-welcomed New Yorker. Recounting his research on the failure of the 1965 Voting Rights Act to guarantee compliance, the memoir sheds depressing light on voter discrimination today. It reminds us of the fragility of democracy and of the urgency of resisting ongoing efforts to subvert it." —Cheryl Lester, co-author of Social Work Practice With a Difference

“As we examine the horrific examples of public racism, Islamophobia, and anti-immigrant policy and behavior in contemporary society, I read this book personally, internalizing it deeply to ask if I would have had similar courage.” —Mark Curnutte, author of Across the Color Line

Taking the Fight South is available in paperback and digital editions from the University of Notre Dame Press. We recommend reading the book with an eye to how you can make anti-racist changes as a parent, community member, and citizen. Ball’s work, efforts, risks, and sacrifices—made by him, his family, and fellow activists—provide important lessons for how we can address systemic racism in the United States today. You can purchase copies wherever books are sold. We encourage you to support your local independent bookstore either in person or online during the coronavirus pandemic. For more information, contact: Kathryn Pitts, pitts.5@nd.edu, 574.631.3267.