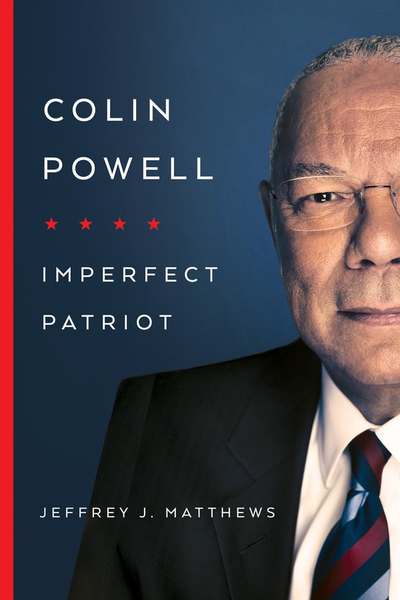 Jeffrey J. Matthews's book Colin Powell: Imperfect Patriot traces the rise to power and the professional life of American statesman and retired four-star general in the U.S. Army, Colin Powell (1937–2021). For the past three decades, Powell has been among America's most trusted and admired leaders. Matthews offers a balanced and revisionist interpretation of Powell's career, including his role in the My Lai massacre cover-up, the Iran-Contra Scandal, and the decisions to launch wars in Iraq and Afghanistan.

The first biography of Powell since 2009, Matthews utilizes a wide variety of new sources that have come to light in the intervening years. Not only was Matthews given access to interview Powell himself, but he also utilizes brand new sources including Powell's personal papers and recent emails, declassified government documents, as well as recent memoirs of leading Bush administration figures such as George W. Bush, Dick Cheney, Donald Rumsfeld, Condoleezza Rice, and George Tenet.

Matthews traces Powell's life from his youth in the South Bronx, where he was raised by his Jamaican immigrant parents, to his rise through the military ranks, and his tenure as Chairman of the Joint Chiefs and Secretary of State. New source materials and first person accounts provide an authoritative reading on the life of a complex, historically significant, and widely admired American statesman and leader.

Jeffrey J. Matthews is the George Frederick Jewett Distinguished Professor at the University of Puget Sound in Tacoma, Washington. He teaches American history and leadership and has written or edited three previous books, including Blacksheep Leadership and The Art of Command: Military Leadership from George Washington to Colin Powell.

Jeffrey Matthews is available for interviews.