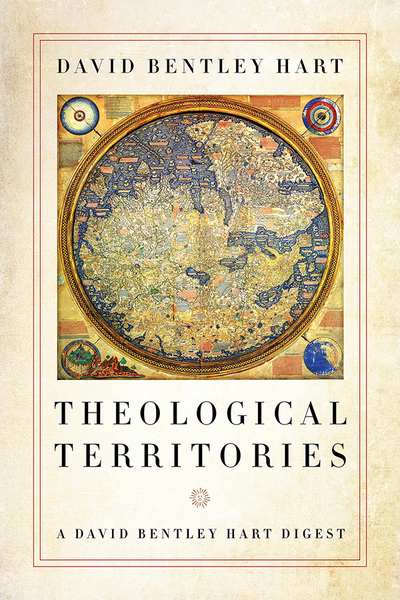 David Bentley Hart, one of America's most eminent contemporary writers on religion, has published a new book titled Theological Territories: A David Bentley Hart Digest. Hart is an Eastern Orthodox scholar of religion, philosophy, and a cultural commentator. He is the author and translator of fifteen books.

In this new volume, Hart reflects on the state of theology "at the borders" of other fields of discourse--metaphysics, philosophy of mind, science, the arts, ethics, and biblical hermeneutics in particular. The book advances many of Hart's larger theological projects, developing and deepening numerous dimensions of his previous work.

Publishers Weekly, in a starred review, calls the book, "[a] scintillating compilation of essays based on lectures--most published here for the first time." PW goes on to say, "whether conversing with theologian Rowan Williams on the healing purpose of tragedy, or meditating on 'the Problem on Evil' as laid out by Dostoyevsky, Hart's witty, erudite writing proves unsettling and invigorating."

Paul J. Griffiths, author of Christian Flesh, says, "David Bentley Hart is among the most interesting and intellectually lively living theologians. Theological Territories shows, with vigor, what it's like to think like a theologian."

Stephen Little, acquisitions editor at Notre Dame Press, says, "For decades, Hart has challenged theologians and non-theologians alike to explore the questions and possibilities we were reluctant to raise. Theological Territories takes us to the very borders of theology, accompanied with Hart's customary wit. Those who are new to his work, and those who already enjoy reading it, are in for a treat and a tour de force."

Theological Territories is available in hardback, paperback, and in numerous digital editions from the University of Notre Dame Press.