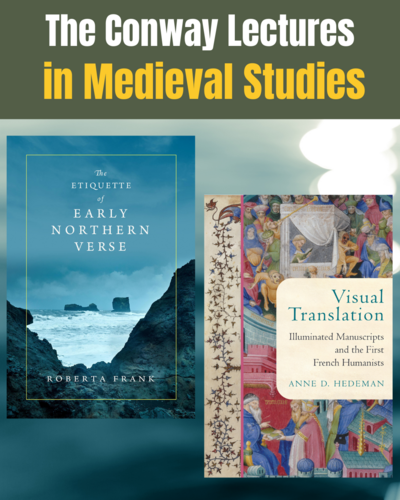 The Conway Lectures in Medieval Studies

The University of Notre Dame Press is delighted to present two new titles in the Conway Lectures in Medieval Studies series. The series brings senior scholars of international distinction to Notre Dame each fall to speak on topics across a variety of disciplines. Notre Dame Press then publishes the lectures. These new titles are the eleventh and twelfth volumes of the series: The Etiquette of Early Northern Verse by Roberta Frank, Professor Emerita at Yale University and University Professor Emerita at the University of Toronto, and Visual Translation: Illuminated Manuscripts and the First French Humanists by Anne D. Hedeman, the Judith Harris Murphy Distinguished Professor of Art History at the University of Kansas.

The Etiquette of Early Northern Verse is the second monograph written by Roberta Frank, whose prolific career spans five decades and whose influence in the fields of Old Norse and Old English cannot be overstated, both through both her scholarship and teaching. In her latest work, she peers into the northern poet’s workshop, eavesdropping as Old English and Old Norse verse reveal their craft secrets. This volume exposes similarities between the formal etiquette of two poetic corpora, one in skaldic and one in Old English, that are normally compared for their differences. Frank carefully examines the architecture and formal conventions of the two types of poetry side-by-side to reveal new insights and stylistic traits that were hidden from view when read alone.

Christopher Abram, author of Evergreen Ash, praises both author and work, noting, “Roberta Frank, one of the most skillful (and certainly the wittiest) of interpreters of early medieval poetry, demonstrates here that early English scops and Viking skálds manipulated their verse forms in remarkably similar ways and to remarkably similar effects.”

Visual Translation breaks new ground in the study of French manuscripts, contributing to the fields of French humanism, textual translation, and the reception of the classical tradition in the first half of the fifteenth century.

While the prominence and quality of illustrations in French manuscripts have attracted attention, their images have rarely been studied systematically as components of humanist translation. Anne D. Hedeman fills this gap by studying the humanist book production closely supervised by Laurent de Premierfait and Jean Lebègue for courtly Parisian audiences in the early fifteenth century. This interdisciplinary study covers an astonishing range of fifteenth-century culture, including history, literature, and art. Hedeman examines how notable, founding French humanists, including Premierfait and Lebègue, were able to expose others to then-unknown Latin classics and contemporary Italian literature through illuminated manuscripts. The book contains 184 color images.

Elizabeth Morrison, editor of Book of Beasts, highlights the importance of Hedeman’s book: “Visual Translation will give scholars across the board not only a new understanding of the place of French humanists in the shaping and accessibility of manuscripts whose creation they oversaw but also insight into the complex and integral role that they played in formulating the programs of illumination that would go on to define these texts for generations.”

The Conway Lectures in Medieval Studies Series is edited by Thomas E. Burman, Professor of History and Robert M. Conway Director of the Medieval Institute at the University of Notre Dame.

The Etiquette of Early Northern Verse and Visual Translation are available in hardcover and digital editions from the University of Notre Dame Press. We encourage you to buy the books at your local independent bookstore either in person or online. For more information, contact: Kathryn Pitts, pitts.5@nd.edu, 574.631.3267.