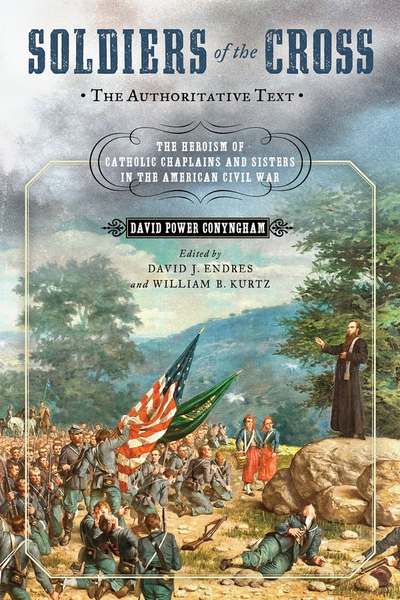 Soldiers of the Cross

On September 24, 2019, at 7PM, Hammes Notre Dame Bookstore will hold a book talk by William Kurtz on the recently published book Soldiers of the Cross, the Authoritative Text: The Heroism of Catholic Chaplains and Sisters in the American Civil War by David Power Conyngham. The event is co-hosted by the University of Notre Dame Press and the Cushwa Center for the Study of American Catholicism.

Shortly after the Civil War ended, David Power Conyngham, an Irish Catholic journalist and war veteran, began compiling the stories of Catholic chaplains and nuns who served during the war. His manuscript, Soldiers of the Cross, is the fullest record written during the nineteenth century of the Catholic Church's involvement in the war, as it documents the service of fourteen chaplains and six female religious communities, representing both North and South.

Unpublished due to Conyngham's untimely death, Soldiers of the Cross remained hidden away in an archive for more than a century, but now, annotated and edited so as to be readable and useful to scholars and modern readers, this long-awaited publication is a fitting presentation of Conyngham's last great work.

William B. Kurtz (ND '06) is co-editor of this groundbreaking book. He is the managing director and digital historian at the John L. Nau III Center for Civil War History and the author of Excommunicated from the Union: How the Civil War Created a Separate Catholic America.

The book, and Kurtz's talk, will appeal to all readers interested in the Civil War and Catholic history.

The event is free and open to the public.