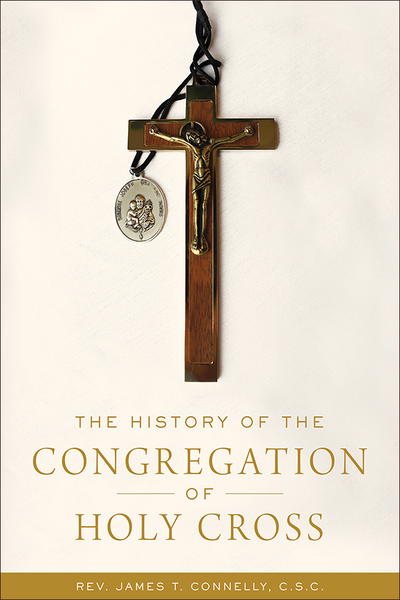 The History of the Congregation of Holy Cross

When James T. Connelly, C.S.C., was asked to research and write this book in 1982 by the then superior general of the Congregation of Holy Cross, Fr. Thomas Barrosse, Connelly was told that it would only be a matter of synthesizing some books and articles already in print. Father Connelly took him at his word, but when he began his research in various archives, he realized that it would not be that simple. Now, nearly four decades later, the University of Notre Dame Press is proud to publish The History of the Congregation of Holy Cross, the first complete history of the Congregation, covering nearly two centuries from 1820 to 2018.

In 1837, Basile Moreau, C.S.C., founded the Congregation of Holy Cross (C.S.C.), a community of Catholic priests and brothers, to minister to and educate the people of France devastated by the French Revolution. During the centuries that followed, the Congregation expanded its mission around the globe to educate and evangelize, including the establishment in 1842 of the Congregation’s first educational institution in America—the University of Notre Dame.

"I believe that it is important to know that the Congregation’s history has not been without controversies and conflicts that divided the community at times," says, Connelly. "For the future, I believe that it is worth knowing that some seemingly risky ventures undertaken at the behest of church authorities, such as going to the United States, Canada, Haiti, and other locations, have turned out to be blessings in the long run although there were struggles involved for many years."

"Connelly, the congregation's archivist, is understandably able to go much deeper into the spirit of hope that not only brought the order into existence in post-Revolutionary France but defines its ministries to this day. . . . [He] details how the congregation cultivated charisms or spiritual gifts for parish ministry, education and missions. " —The Journal Gazette

"I want to celebrate and applaud the publication of Father Jim Connelly's The History of the Congregation of Holy Cross. Father Connelly's book is the first to retell this great story. For this, we can all be forever grateful." —Edward A. Malloy, C.S.C., president emeritus, University of Notre Dame

“This is an important contribution to the history of the order from its early days in Le Mans, France, to its international institutional footprint at the end of the twentieth century. James Connelly has produced an important, incredibly well-researched volume.” —William B. Kurtz, co-editor of Soldiers of the Cross, the Authoritative Text

Connelly, the author of a number of books, including The University of Portland: A Century of Teaching, Faith, and Service and Basile Moreau and the Congregation of Holy Cross, and editor of many more, including The Chronicles of Notre Dame du Lac by Edward Sorin, C.S.C., says that in The History of the Congregation of Holy Cross he set out to focus on the various ministries of the community but as he got deeper into the project he could not resist recounting some details of the stories of many of those individuals who figured prominently in the story, such as Dujarié, Sorin, Angela Gillespie, Mary of the Seven Dolors, Valentine Czyzewski, Gilbert Français, Patrick Peyton, to mention a few. Connelly says, "I think this has made the book more interesting and the story more humane."

You can read more about the book here and in an interview with Todd Ream for the Cushwa Center for the Study of American Catholicism.

The History of the Congregation of Holy Cross is available in print and digital editions from Notre Dame Press. You can purchase copies wherever books are sold. We encourage you to support your local independent bookstore either in person or online during the coronavirus pandemic.

For more information about the book, or to schedule an interview with the author, contact Kathryn Pitts, pitts.5@nd.edu, 574.631.3267.