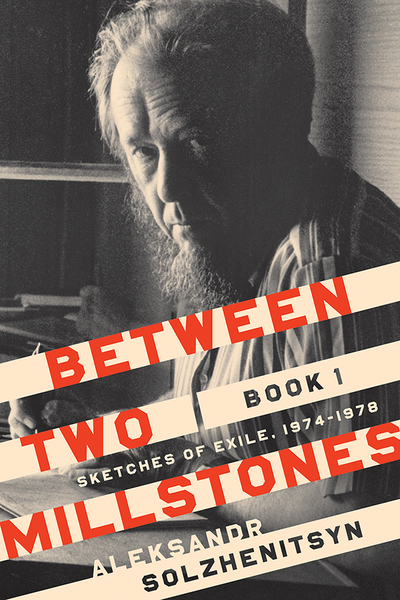 The University of Notre Dame Press is pleased to announce the forthcoming publication of BETWEEN TWO MILLSTONES: Sketches of Exile. “This will be the first English translation of Book 1 of Solzhenitsyn’s memoir of the West, covering the years of 1974-1978,” notes Kathryn Pitts, Marketing Manager for University of Notre Dame Press, “and is part of our Center for Ethics and Culture Solzhenitsyn Series."

Pitts went on to note, "The Center for Ethics and Culture Solzhenitsyn series showcases the contributions and continuing inspiration of Nobel Prize–winning novelist and historian, Aleksandr Solzhenitsyn (1918–2008), and makes available works of Solzhenitsyn, including previously untranslated works. In his novels, essays, memoirs, and speeches, Solzhenitsyn revealed the devastating core of totalitarianism and warned against political, economic, and cultural dangers to the human spirit.”

BETWEEN TWO MILLSTONES dramatically reflects the pain of Solzhenitsyn's separation from his Russian homeland and the chasm of miscomprehension between him and Western society, and contains vivid descriptions of Solzhenitsyn's journeys to various European countries and North American locales, where he and his wife Natalia searched for a location to settle their young family. There are fascinating descriptions of:

• Comments on his television appearances

• The KGB disinformation efforts to besmirch his name

• There are also passages on Solzhenitsyn’s family and their property in Cavendish, Vermont, whose forested hillsides and harsh winters evoked his Russian homeland, and where he could finally work undisturbed on his ten-volume history of the Russian Revolution, The Red Wheel

"These 'sketches of exile' were written contemporaneously with the described events and are informed with the same energy and vivid powers of description that characterized Solzhenitsyn's acclaimed memoir The Oak and the Calf," says Daniel J. Mahoney, Professor of Political Science, Assumption College and author of the Foreword to the book. “BETWEEN TWO MILLSTONES has appeared in Russian, French, German, Italian, and Romanian, but not in the country where Solzhenitsyn spent eighteen years of his western exile. It is one of the great memoirs of our time and a distinguished work of art in its own right."

For more information regarding this memoir or series, please contact Purdy at cjpurdypr@gmail.com, or 646.787.7890