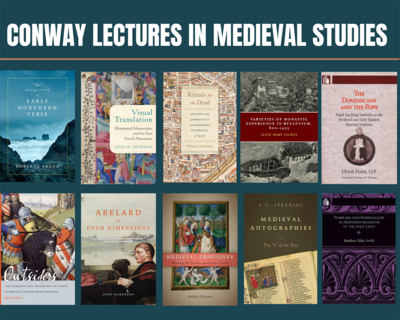 This year, the University of Notre Dame’s Medieval Institute is celebrating its 75th anniversary. Started in 1946 by Fr. Philip Moore, C.S.C, the Medieval Institute has been the leading institution in the United States for the study of medieval Catholic culture and history. Beyond that, it has grown as well into a pre-eminent center for research and education on Greek Byzantium, Arab Islam, and the Jewish diaspora—and especially on a millennium of interactions among them.

The Etiquette of Early Northern Verse

Roberta Frank peers into the northern poet’s workshop, eavesdropping as Old English and Old Norse verse reveal their craft secrets. This book places two vernacular poetries of the long Viking Age into conversation, revealing their membership in a single community of taste, a traditional stylistic ecology that did serious political and historical work. By decluttering and stripping away excess, by drawing words through a tight mesh of meter, alliteration, and rhyme, the early northern poet filtered out dross and stitched together a poetics of stark contrasts and forebodings.

Visual Translation breaks new ground in the study of French manuscripts, contributing to the fields of French humanism, textual translation, and the reception of the classical tradition in the first half of the fifteenth century. While the prominence and quality of illustrations in French manuscripts have attracted attention, their images have rarely been studied systematically as components of humanist translation. Anne D. Hedeman fills this gap by studying the humanist book production closely supervised by Laurent de Premierfait and Jean Lebègue for courtly Parisian audiences in the early fifteenth century. With over 180 color images, this major reference book will appeal to students and scholars of French, comparative literature, art history, history of the book, and translation studies.

Varieties of Monastic Experience in Byzantium, 800-1453

In this unprecedented introduction to Byzantine monasticism, Alice-Mary Talbot surveys the various forms of monastic life in the Byzantine Empire between the ninth and fifteenth centuries. Varieties of Monastic Experience in Byzantium, 800-1453 does not attempt to be a history of Byzantine monasticism but rather emphasizes the multiplicity of ways in which Byzantine men and women could devote their lives to service to God, with an emphasis on the tension between the two basic modes of monastic life, cenobitic and eremitic.

Rituals for the Dead

Religion and Community in the Medieval University of Paris

In this fascinating book, William J. Courtenay examines aspects of the religious life of one medieval institution, the University of Paris, in the thirteenth and fourteenth centuries. In place of the traditional account of teaching programs and curriculum, however, the focus here is on religious observances and the important role that prayers for the dead played in the daily life of masters and students.

The Humanity and Inhumanity of Giants in Medieval French Prose Romance

Sylvia Huot argues that the presence of giants allows for fantasies of ethnic and cultural conflict and conquest, and for the presentation—and suppression—of alternative narrative and historical trajectories that might have made Arthurian Britain a very different place. Focusing on medieval French prose romance and drawing on aspects of postcolonial theory, Huot examines the role of giants in constructions of race, class, gender, and human subjectivity. By asking to what extent views of giants in Arthurian romance respond to questions that concern twenty-first-century readers, Huot demonstrates the usefulness of current theoretical concepts and the issues they raise for rethinking medieval literature from a modern perspective.

A Twelfth-Century Philosopher in His Context and Ours

One of the leading scholars of medieval philosophy and a specialist on Abelard’s thought, John Marenbon provides new interpretations of central areas of Peter Abelard’s philosophy and its influence. For readers new to Abelard, this book provides an introduction to his life and works along with discussion of his central ideas in semantics, ethics, metaphysics, and philosophy of religion. For specialists, the book contains new arguments about the authenticity and chronology of Abelard’s logical work, fresh evidence about his relations with Anselm and Hugh of St. Victor, a new understanding of how he combines the necessity of divine action with human freedom, and reinterpretations of important passages in which he discusses semantics and metaphysics.

Reading the Secular against the Sacred

Barbara Newman offers a new approach to the many ways that sacred and secular interact in medieval literature, arguing that the sacred was the normative, unmarked default category against which the secular always had to define itself and establish its niche. Newman refers to this dialectical relationship as “crossover”—which is not a genre in itself, but a mode of interaction, an openness to the meeting or even merger of sacred and secular in a wide variety of forms.  Newman convincingly and with great clarity demonstrates the widespread applicability of the crossover concept as an analytical tool, examining some very disparate works.

In this volume, A. C. Spearing develops a new engagement of narrative theory with medieval English first-person writing, focusing on the roles and functions of the “I” as a shifting textual phenomenon, not to be defined either as autobiographical or as the label of a fictional speaker or narrator. Spearing identifies and explores a previously unrecognized category of medieval English poetry, calling it “autography.”  He argues that autography arose as a means of liberation from the requirement to tell stories with preordained conclusions and as a way of achieving a closer relation to lived experience, with all its unpredictability and inconsistencies.

Templars and Hospitallers as Professed Religious in the Holy Land

Jonathan Riley-Smith attends to the Templars’ and Hospitallers’ primary role as religious orders, not as military phenomena or economic powerhouses. In a prologue, four chapters, and an epilogue, Riley-Smith discusses the origins of the orders in dedication to the protection of pilgrims to the Holy Land (Templars) and to the care of the poor and the sick among them (Hospitallers). He examines their traditions and early history, the organization of their communities, modes of governance, and, in the fourth chapter, important differences between the orders and a brief account of their respective fates in the wake of the Crusades.

Dominicans and the Pope

Ulrich Horst reviews the long tradition within the Dominican order of commenting on the teaching authority of the pope and the role of conciliar authority. Horst succinctly shows the differences within the order on the topic and makes clear how Dominicans tended to differ on the matter from theologians of other orders such as the Franciscans and, later, the Jesuits, whose views would eventually lead to the proclamation on infallibility at Vatican I. Despite his distinguished career as a medievalist and authority on ecclesiology, little of Horst’s scholarly corpus has been translated into English. These lectures, then, mark an introduction of this formidable scholar to a wider audience.

Perceptions of the Past in the Early Middle Ages

Historical writing of the early middle ages tends to be regarded as little more than a possible source of facts, but Rosamond McKitterick establishes that early medieval historians conveyed in their texts a sophisticated set of multiple perceptions of the past. In these essays, McKitterick focuses on the Frankish realms in the eighth and ninth centuries and examines different methods and genres of historical writing in relation to the perceptions of time and chronology. She claims that there is an extraordinary concentration of new text production and older text reproduction in this period that has to be accounted for, and whose influence is still being investigated and established.

Languages of Statecraft between Chaucer and Shakespeare

Taking points of departure from Quentin Skinner and J. G. A. Pocock, Paul Strohm deploys superior powers of textual and linguistic analysis to uncover a 'pre-Machiavellian moment': an historical phase which saw political discourse deployed with unprecedented slipperiness and subtlety; a time when it was thought possible not just to follow Fortune, but to jam her turning wheel. That this should have occurred in the fifteenth century, a period regarded as too dull, tradition-bound, or chaotic for significant discursive innovation, is just one of the surprises of this remarkable book.