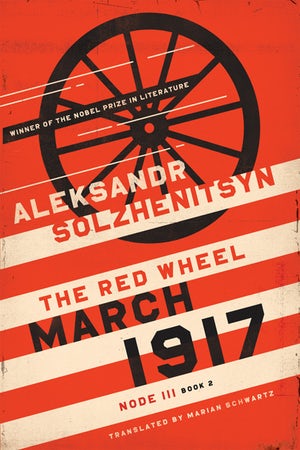 The Red Wheel is Nobel Prize–winner Aleksandr Solzhenitsyn's multivolume epic work about the Russian Revolution. He spent decades writing about just four of the most important periods, or "nodes.” This is the first time that the monumental March 1917—the third node—has been translated into English. It tells the story of the Russian Revolution itself, during which the imperial government melts in the face of the mob and the giants of the opposition prove incapable of controlling the course of events.

The action of Book 2 (of four) of March 1917 is set during March 13–15, 1917, the Russian Revolution's turbulent second week. The revolution has already won inside the capital, Petrograd. News of the revolution flashes across all Russia through the telegraph system of the Ministry of Roads and Railways. But this is wartime, and the real power is with the army. At Emperor Nikolai II’s order, the Supreme Command sends troops to suppress the revolution in Petrograd. Meanwhile, victory speeches ring out at Petrograd's Tauride Palace. Inside, two parallel power structures emerge: the Provisional Government and the Executive Committee of the Petrograd Soviet of Workers' and Soldiers’ Deputies, which sends out its famous "Order No. 1," presaging the destruction of the army.  The troops sent to suppress the Petrograd revolution are halted by the army’s own top commanders. The Emperor is detained and abdicates, and his ministers are jailed and sent to the Peter and Paul Fortress. This sweeping, historical novel is a must-read for Solzhenitsyn's many fans, as well as those interested in twentieth-century history, Russian history and literature, and military history.

Aleksandr Solzhenitsyn (1918–2008) is widely acknowledged as one of the most important figures—and perhaps the most important writer—of the last century. His story One Day in the Life of Ivan Denisovich (1962) made him famous, and The Gulag Archipelago, published to worldwide acclaim in 1973, further unmasked communism and played a critical role in its eventual defeat. Solzhenitsyn won the Nobel Prize in 1970 and was exiled to the West in 1974. He ultimately published dozens of plays, poems, novels, and works of history, nonfiction, and memoir, including Cancer Ward, In the First Circle, The Oak and the Calf, and Between Two Millstones, Book 1: Sketches of Exile, 1974–1978 (University of Notre Dame Press, 2018).

Marian Schwartz is a prizewinning translator of Russian literature. She is the principal translator of the works of Nina Berberova, Mikhail Bulgakov, Ivan Goncharov, and others.