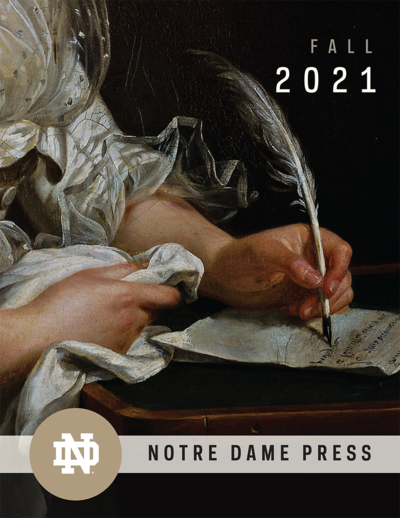 The University of Notre Dame Press is proud to present its catalog of Fall 2021 titles. This collection promises to engage readers with a variety of subjects, from theology to politics to medical ethics.

Waed Athamneh, who published Modern Arabic Poetry with Notre Dame Press, returns with Muhammad Masud with Defiance in Exile: Syrian Refugee Women in Jordan. This volume offers for the first time in a book-length format Syrian refugee women’s stories of defiance and triumph in the aftermath of the Syrian uprising.

Two new English translations will be released in The Center for Ethics and Culture Solzhenitsyn Series: a new paperback edition of Nobel prize–winner Aleksandr Solzhenitsyn’s memoir of the West Between Two Millstones, Book 1: Sketches of Exile, 1974–1978 and March 1917: The Red Wheel, Book 3. The Red Wheel is Solzhenitsyn’s multivolume epic work about the Russian Revolution told in the form of a historical novel. The action of March 1917, Book 3 is set during March 16–22, 1917, and tells the story, day by day, of the unfolding Revolution.

In Gay, Catholic, and American: My Legal Battle for Marriage Equality and Inclusion, Greg Bourke (ND MA ‘82) tells his inspiring story of how the Bourke De Leon family struggled to overcome antigay discrimination and became one of the named defendants in the landmark United States Supreme Court decision Obergefell vs. Hodges, which legalized same-sex marriage nationwide in 2015, all while remaining steadfast in his lifelong Catholic faith.

The newest additions to the Catholic Ideas for a Secular World series are Erika Bachiochi’s The Rights of Women: Reclaiming a Lost Vision and Steven D. Smith’s Fictions, Lies, and the Authority of Law. Inspired by the writings of Mary Wollstonecraft, Bachiochi recovers an all but forgotten intellectual history that asserts a moral vision of women’s rights, and she argues for a reawakening of this tradition as an alternative to modern feminism’s focus on autonomy. Smith’s book is a perceptive study in which he offers a diagnosis explaining how authority today is based in pervasive fictions and how this situation can amount to, as Hannah Arendt put it, “the loss of the groundwork of the world.”

In Religion and Politics Beyond the Culture Wars: New Directions in a Divided America, edited by Darren Dochuk, leading scholars in American religious and political history challenge readers to look past familiar clashes over social issues to appreciate the ways in which faith has fueled twentieth-century U.S. politics beyond predictable partisan divides and across a spectrum of debates ranging from environment to labor, immigration to civil rights, domestic legislation to foreign policy.

The Way of Medicine: Ethics and the Healing Profession, by Farr Curlin and Christopher Tollefsen, is part of the Notre Dame Studies in Medical Ethics and Bioethics series. This book articulates and defends an account of medicine and medical ethics meant to challenge the reigning provider of services model and calls for practitioners to recover what they call the Way of Medicine.

This season, we are launching the Liu Institute Series in Chinese Christianities with Christie Chui-Shan Chow’s book, Schism: Seventh-day Adventism in Post-Denominational China. This is the first monograph that documents the life of the Chinese Adventist denomination from the mid-1970s to the 2010s, and explores how Chinese Seventh-day Adventists have used schism as a tool to retain, revive, and recast their unique ecclesial identity in a religious habitat that resists diversity.

Creation ex nihilo: Origins, Development, Contemporary Challenges, edited by Gary A. Anderson and Markus Bockmuehl, will be released in paperback. This unique and fascinating work presents a compelling set of arguments for why the doctrine ex nihilo should remain central to the grammar of contemporary Christian theology.

We hope you enjoy these books and more as you browse through our catalog. You can pre-order these titles and read more about other books from Notre Dame Press on our website. This catalog is also available in a pdf format or on Edelweiss+.