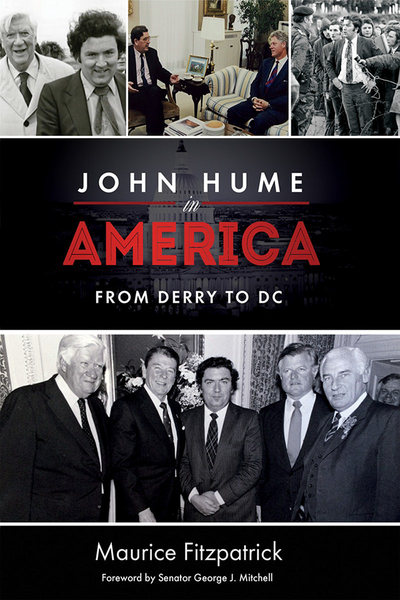 John Hume, recipient of the Nobel Peace Prize for his work in Northern Ireland, died on Aug. 3, 2020. Hume was one of the architects of the 1998 Good Friday Agreement, which ended the violent conflict in Northern Ireland by bringing unionists and Irish republicans into a power-sharing government. The University of Notre Dame Press recently published an important book on Hume's work, John Hume in America: From Derry To DC, by Maurice Fitzpatrick, the 2020 Heimbold Chair of Irish Studies at Villanova University. In this volume, Fitzpatrick chronicles the rise of John Hume from the riot-torn streets of Northern Ireland to his work with American presidents, from Jimmy Carter to Bill Clinton, and the United States Congress to leverage U.S. support for peace in Northern Ireland.

"John Hume's role in our efforts to bring peace to the Island of Ireland has been a profound and generous one. A man of great vision, he understood that consensus could only be achieved through respectful and meaningful dialogue. He was the moral architect of an inclusive peace process, which has shaped the Ireland we inhabit today. This publication provides a valuable insight into the work and legacy of John Hume, who will always be recalled as a dedicated and visionary peacemaker." —Michael D. Higgins, President of Ireland

Hume is widely considered the architect of the Northern Ireland peace process, and he engaged the attention and assistance of the “Four Horsemen”—Thomas “Tip” O’Neill, Daniel Patrick Moynihan, Hugh Carey, and Ted Kennedy—to his cause, lending his effort worldwide credibility and putting significant pressure on the British and Irish governments to strive for peace.

"John Hume was full of life and energy, a natural leader, a man who took courageous and personally dangerous positions all his life, in an effort to find a way forward in Northern Ireland. I am deeply gratified that a history of his work with American leaders has now been written." —Senator George J. Mitchell, from the foreword

Supported by the Hume family, Fitzpatrick’s critical work is the missing piece in the jigsaw of Hume’s political life, tracing his philosophy of non-violence during the Civil Rights movement to his indispensable work with allies in the United States towards the creation of a new political framework in Northern Ireland. The book will be of keen interest to historians and students of political science and Irish, peace, and conflict studies, as well as non-academic audiences.