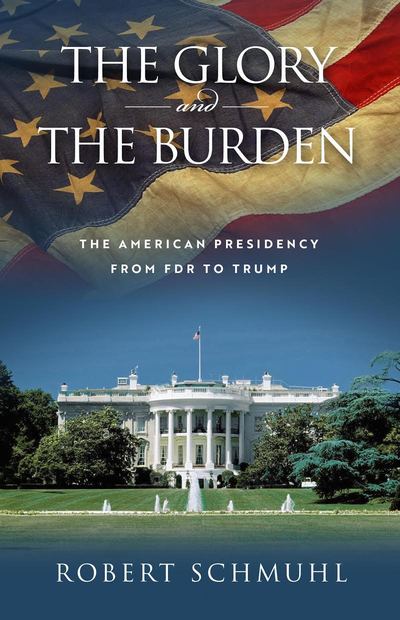 The Glory And The Burden

Robert Schmuhl, the Walter H. Annenberg-Edmund P. Joyce Chair Emeritus in American Studies and Journalism at the University of Notre Dame, is the author or editor of fifteen books. In his newest offering, The Glory and the Burden: The American Presidency from FDR to Trump, which will be published on September 15, he examines the state of the American presidency and the forces that have shaped it over the past seventy-five years, with an emphasis on the dramatic changes that have taken place within the institution and to the individuals occupying the Oval Office.

Schmuhl traces the evolution of the modern presidency back to the terms of Franklin Roosevelt, maintaining that FDR’s White House years had a profound impact on the office, resulting in significant changes to the job and to those who have performed it since. Specifically, the Twenty-Second Amendment to the Constitution, limiting a president to two terms, has largely redefined each administration’s agenda. News sources and social media have also grown exponentially, exercising influence over the conduct of presidents and affecting the consequences of their behavior.

The Glory and the Burden has garnered early notice, including advance praise from Robert Costa (The Washington Post and Washington Week on PBS), who said, "It's the kind of book that every American should read in the run-up to the next presidential election.” Julia Keller (Pulitzer Prize–winning writer) says, "Robert Schmuhl puts the presidency on the couch, thereby revealing what makes it—and us, too—tick."

USA Today: "It shouldn't be partisan or divisive to want a moral role model in the White House"

Irish Independent: "Trump out to hog the Independence Day limelight while creating his own fireworks"

Irish Independent: "Trump has divided the United States but he will stir up 'forgotten America' to stay in White House"

Robert Schmuhl is available for interviews.