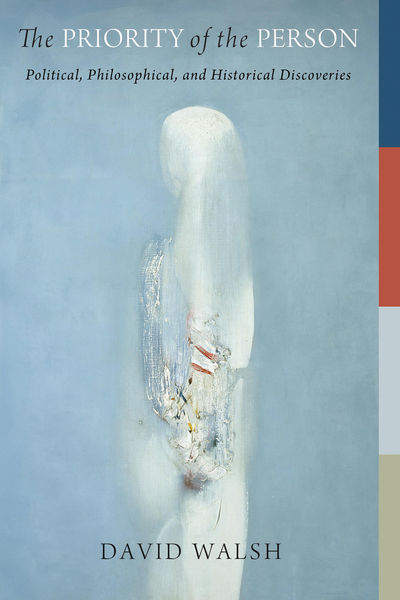 The Priority of the Person

David Walsh is one of the most prominent political philosophers in North America. In his new book, The Priority of the Person: Political, Philosophical, and Historical Discoveries, available this month from the University of Notre Dame Press, he probes our constant conviction that persons matter more than anything else in the universe. Each is an astonishing flash of transcendence in our everyday world. The Priority of the Person expands upon Walsh's previous book, The Politics of the Person as the Politics of Being (2015).

In The Priority of the Person, Walsh advances the argument that “person” is the central category of modern political thought and philosophy. This book is divided into three main parts. Beginning with the political discovery of the inexhaustibility of persons, it then explores the philosophic differentiation of the idea of the “person,” and finally traces its historical emergence through art, science, and faith. Walsh argues that, although the roots of the idea of “person” are found in the Greek concept of the mind and in the Christian conception of the soul, this notion is ultimately a distinctly modern achievement, because it is only the modern turn toward interiority that illuminated the unique nature of persons as each being a world unto him or herself. As Walsh shows, it is precisely this feature of persons that makes it possible for us to know and communicate with others, for we can only give and receive one another as persons. In this way alone can we became friends and, in friendship, build community.

In showing how the person is modernity’s central preoccupation, Walsh’s The Priority of the Person makes an important contribution to current discussions in both political theory and philosophy. It will also appeal to students and scholars of theology and literature, and any groups interested in the person and personalism.

"With each new book, David Walsh's formidable project broadens and deepens. His is a rare and elegant meditative reflection, grounded in a luminous appreciation of the inexhaustible dignity of the human person, and in the priority of practice, of lived experience, to all intellectual and theoretical abstractions. All in all, an intellectual gem not to be missed." —Daniel J. Mahoney, author of The Conservative Foundations of Liberal Order

David Walsh is professor of politics at the Catholic University of America. He is the author and editor of a number of books, including The Modern Philosophical Revolution: The Luminosity of Existence.

The Priority of the Person is available in paperback and numerous digital editions. The book is part of The Beginning and the Beyond of Politics series from Notre Dame Press. For more information, or a review copy, contact: Kathryn Pitts, pitts.5@nd.edu, 574.631.3267.