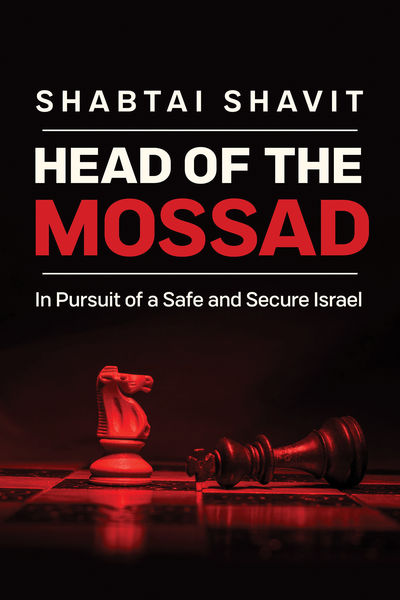 Head of the Mossad

Head of the Mossad: In Pursuit of a Safe and Secure Israel is a brilliant and much-needed book on intelligence, Israeli history, and global security by Shabtai Shavit, the former director of Israel’s principal secret intelligence service (1989-1996). The book was originally published in Hebrew in 2018. The University of Notre Dame Press is releasing the first English translation of the book on September 30, 2020.

Candid and powerfully argued, Shavit tells his life story, including his role in alerting American intelligence agents to the presence of al-Qaeda operatives in the US before 9/11, the secret negotiations that led to Israel signing a peace treaty with Jordan, and frequent long-running battles with Iran. Shavit also provides fresh insights on present tensions and possible solutions to terrorism and security issues around the world, including in Iraq, Iran, Libya, and Syria.

Shavit, who has been a private citizen for more than two decades, was recently interviewed by the Jewish Insider about the book and discussed the historic peace agreement between Israel and the United Arab Emirates. Shavit says, “During my tenure as director and even before, I was personally involved in all kinds of relationships between the State of Israel and most of the Emirates. . . . Since those relationships were secret or clandestine, the Israeli party which was responsible was the Mossad.”

Head of the Mossad has received strong pre-publication interest. Kirkus Reviews says, the book is “a well-documented . . . logistical delineation of decades of sensitive Israeli security and intelligence concerns. Among other significant historical events, Shavit’s tenure coincided with the fall of the Berlin Wall, the First Intifada, the Oslo Accords, and the election and assassination of Prime Minister Yitzhak Rabin.” Interviews, features,  and excerpts from the book have appeared in The Jerusalem Post, The Times of Israel, Ami Magazine, Counter Terrorism Today podcast, SpyTalk, Moment, Perspectives on Terrorism, The Suburban, Fathom, and Jewish Insider.

Shabtai Shavit has over fifty years of experience in international security and counterterrorism and is an internationally recognized authority in the field. He served in the Mossad, Israel's prestigious intelligence agency, for thirty-two years, eventually rising to the position of director. Previously, he served in the IDF, the Israeli Defense Forces, retiring after a distinguished service in "Sayeret Matkal," Israel's elite special forces and SWAT unit.

Shabtai Shavit is available for interviews.

Head of the Mossad: In Pursuit of a Safe and Secure Israel is available in hardback and digital editions from University of Notre Dame Press. The book is available wherever books are sold. For more information, or a review copy, contact: Kathryn Pitts, pitts.5@nd.edu, 574.631.3267.