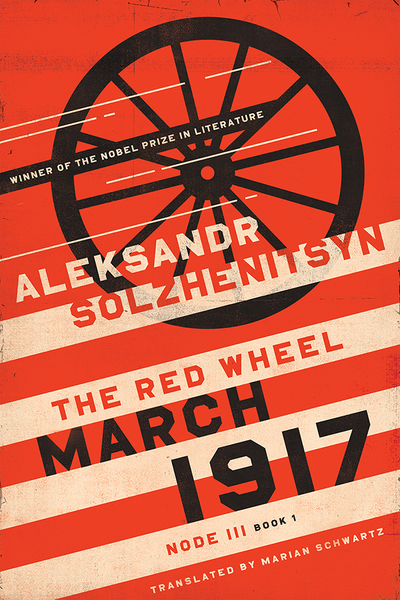 Nobel Prize–winner Aleksandr Solzhenitsyn’s March 1917: The Red Wheel, Node III, Book 1, translated by Marian Schwartz, has been named a 2018 Outstanding Academic title by Choice magazine. This year’s Outstanding Academic Title list includes 455 books and digital resources chosen by the Choice editorial staff from among the over 4,800 titles reviewed by Choice during the past year.

These outstanding works have been selected for their excellence in scholarship and presentation, the significance of their contribution to the field, and their value as an important—often the first—treatment of their subject. Constituting about nine percent of the titles reviewed by Choice during the past year, and two percent of the more than 21,000 titles submitted to Choice during this same period, Outstanding Academic Titles are truly the “best of the best.”

The Red Wheel is Solzhenitsyn’s magnum opus about the Russian Revolution. Solzhenitsyn tells this story in the form of a meticulously researched historical novel, supplemented by newspaper headlines of the day, fragments of street action, cinematic screenplay, and historical overview. March 1917—the third node—tells the story of the Russian Revolution itself, during which not only does the Imperial government melt in the face of the mob, but the leaders of the opposition prove utterly incapable of controlling the course of events.

March 1917: The Red Wheel, Node III, Book 1 has been widely reviewed in The Guardian, The New Criterion, National Review, Times Literary Supplement, and other publications.