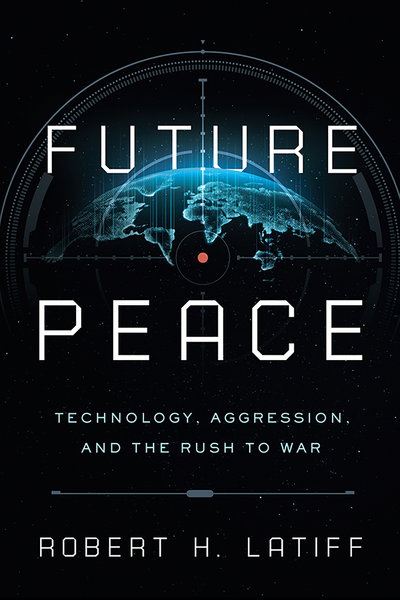 In a world where complex technologies clash with escalating international tensions, how can artificial intelligence be trusted?

Today, there are more than six hundred Department of Defense projects that are looking to incorporate artificial intelligence into warfighting. According to Sue Halperin in a recent article in The New Yorker, the rise of A.I. is rapidly changing how enemy intelligence is gathered and creating algorithms to equip fighter planes to execute war plans more accurately. On March 1, 2022, the University of Notre Dame Press will publish Future Peace: Technology, Aggression, and the Rush to War by Robert H. Latiff, an adjunct professor with the John J. Reilly Center for Science, Technology, and Values at the University of Notre Dame. Latiff received his Ph.D. (ND ‘74) and M.S. (ND ‘73) in materials science and his B.S. in Physics (ND ‘71) from the University of Notre Dame.

In Future Peace, the eagerly awaited sequel to his critically acclaimed book Future War, Latiff questions our overreliance on technology and examines the pressure-cooker scenario created by the growing animosity between the United States and its adversaries, our globally deployed and thinly stretched military, the capacity for advanced technology to catalyze violence, and the American public’s lack of familiarity with these topics.

When writing Future Peace, Latiff says, “I intended to draw attention to the fact that we, collectively, are not paying enough attention to the growing influence complex technologies are having on warfare and, critically, the role technology plays in the motivations of our leadership in employing military forces.” This book specifically explores countries’ too-frequent decisions to resort to violence and how technology influences those decisions. Latiff continues, “I hope to impress on the reader the utter wastefulness of such enormous arms expenditures and preparations for war and caution against being mesmerized by new weapons technologies.”

Robert H. Latiff retired from the U.S. Air Force as a Major General in 2006. He is a private consultant, providing advice on advanced technology matters to corporate and government clients and to universities. His previous book Future War: Preparing for the New Global Battlefield was published in 2017.

Learn more about Latiff’s fight for more ethical weapons technology by visiting the University of Notre Dame’s award-winning “What Would You Fight For?” series, or by reading our interview with the author here.

Robert Latiff is available for interviews.

Future Peace will be published in a hardcover edition by the University of Notre Dame Press next month. For more information, a review copy, or to book an interview, contact Kathryn Pitts, pitts.5@nd.edu, 574.631.3267.