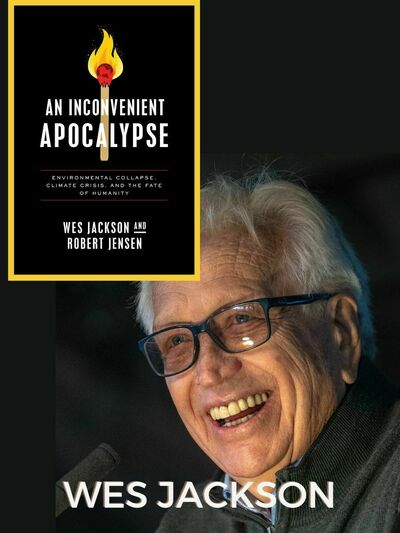 Wes Jackson, co-author, with Robert Jensen, of "An Inconvenient Apocalypse"

This year, The Land Institute is bringing back its Prairie Festival 2022 after a two-year hiatus from its outdoor venue in Salina, Kansas. Wes Jackson, co-founder and president emeritus of The Land Institute, and one of the foremost figures in the international sustainable agriculture movement, will discuss his new book, An Inconvenient Apocalypse: Environmental Collapse, Climate Crisis, and the Fate of Humanity, co-authored with Robert Jensen, during the festival.

On September 24 from 5 PM to 6 PM, Prairie Festival will feature a Book Signing of An Inconvenient Apocalypse with Wes Jackson. Later that evening at 7:30 PM, Jackson will appear as a special guest during A Concert in Celebration of the Earth, featuring saxophonist and seven-time Grammy® winner Paul Winter and Brazilian pianist Henrique Eisenmann. The musicians will accompany Jackson in a narration of texts from his environmental literature.

On September 25 at 10:00 AM, Eric Schlosser, journalist, filmmaker, and New York Times bestselling author of Fast Food Nation, will interview Jackson in a session titled The Old Future is Gone. This event will focus on issues addressed in An Inconvenient Apocalypse and will be livestreamed.

Reviewed in The Guardian, Resilience, Publisher’s Weekly, Forward Reviews, and Library Journal, An Inconvenient Apocalypse is unflinching in its assessment of the global environmental crisis. In it, Jackson and Jensen argue that we must reconsider the origins of the consumption crisis and the challenges we face in creating a survivable future. The pair propose the climate crisis has already progressed beyond simple or nondisruptive solutions. According to The Guardian, the book bluntly heralds the news that “societal collapse on a global scale is inevitable.”

Following Jackson’s appearance at this year’s Prairie Festival, he and Robert Jensen will participate in a virtual book launch at The Raven Book Store on October 6 from 7 PM to 8 PM.

An Inconvenient Apocalypse is published by the University of Notre Dame Press. It is available at undpress.nd.edu or wherever books are sold. We encourage you to support your local independent bookstore either in person or online. For more information, contact: Kathryn Pitts, pitts.5@nd.edu, 574.631.3267.