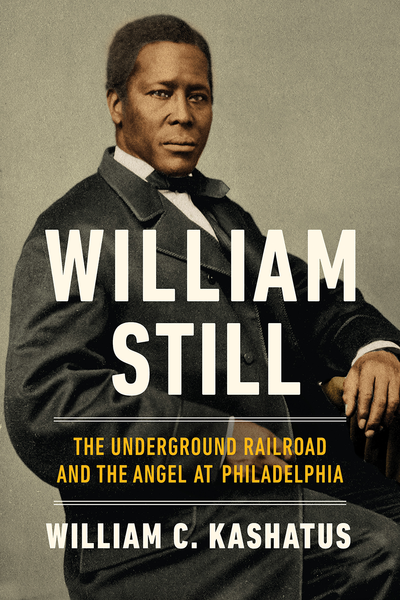 "An essential work that is a must-read for those interested in the Underground Railroad and Black history in the U.S." —Library Journal (Starred Review)

To commemorate the 200th anniversary of the birth of William Still on October 7, 2021, the University of Notre Dame Press is proud to publish William Still: The Underground Railroad and the Angel at Philadelphia by William C. Kashatus.

Still built a reputation as a courageous leader, writer, philanthropist, and guide for fugitive slaves. Kashatus’s sweeping book details Still's life story beginning with his parents' escape from bondage in the early nineteenth century and continuing through his youth and adulthood as one of the nation's most important Underground Railroad agents and, later, as an early civil rights pioneer. Still worked personally with Harriet Tubman, assisted the family of John Brown, helped Brown's associates escape from Harper's Ferry after their famous raid, and was a rival to Frederick Douglass among nationally prominent African American abolitionists.

William Still includes a database of the 995 runaways Still helped escape from the South to the North and Canada between 1853 and 1861, originally recorded in his book Underground Railroad. Twenty different fields document name, age, gender, skin color, date of escape, place of origin, mode of transportation, and literacy. The book will appeal to general readers interested in the history of the anti-slavery movement and the operation of the Underground Railroad, as well as genealogists tracing African American ancestors.

• an excerpt in Church Life Journal

• an Author Interview with William Kashatus

William C. Kashatus holds a doctorate in history education from the University of Pennsylvania. He curated Just Over the Line: Chester County and the Underground Railroad, recognized by The Journal of American History as a “first rate exhibit and model of outreach to the local community” and winner of the American Association of Historical Societies and Museums Award of Merit. He is the author or co-author of thirty books, including Harriet Tubman: A Biography and In Pursuit of Freedom: Teaching the Underground Railroad.

William Still is available in hardback and digital editions. For more information, to request a review copy, or to book an interview with William Kashatus, contact: Kathryn Pitts, pitts.5@nd.edu, 574.631.3267.